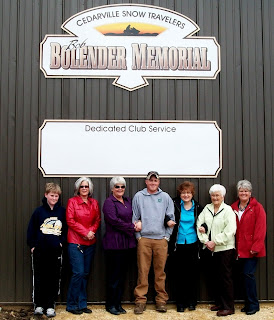 On April 23 the Cedarville Snow Travelers snowmobile club honored the late Bob Bolender with a memorial sign that was hung on the club’s groomer shed at the Wes Block trailhead of the Jane Addams trail. Upon Bob’s passing, his family donated his memorial money to the Snow Travelers.  Mike of Murray’s Signs and member of the club designed and hand painted the 4’x 8’sign along with a “Dedicated Service” panel which is 30” by 8’.
In 1984 Mr. Bolender “Boner” was one of the founding members of the club along with Bill and Jan Artman, Les and Nancy Bicknese, Ed and Rose Dotzel, and Herb and Norma Enzler who were all from the Cedarville area. There were no trails and riding ditches was the norm. The first trails were marked by ‘Tombstone’ pizza signs. The sport has come a long way since those early years!  Members of our club helped in the creation of the Jane Addams trail which enables riders to travel north to Wisconsin, west to Pearl City, south to Shannon, and east to Rock City.  This recreation trail has supported the growth of the club.  The Cedarville Snow Travelers maintain and groom many miles of trails in Stephenson County.
Bob was a devoted worker and an active club member who will always be remembered with gratitude. He planned the layout of the trails and did many behind the scene jobs, including donating money, without taking credit for any of it. He was on the board of directors and attended alliance meetings. Bob was awarded the IL Snowmobiler of the year award. Not wanting the attention, he slipped out of the room and made his wife accept the award for him. He is missed and we will always be grateful for his contributions.
Home